We would like to thank everyone who took the time to complete our recent parents survey to provide feedback to the club. We had 179 completed responses to the survey.

In terms of overall satisfaction, the survey revealed that:

For the many volunteers who spend countless hours through the season, it is encouraging to see such positive response on the items above that reflect core values at the club.

We have had a number of meetings since the survey was completed to categorize comments and input and look at where we can make improvements to the hockey program at Faustina.

Below are some charts from the survey results as well as responses to some common themes / suggestions that we received.

Please feel free to connect with us at [email protected] if you have any other questions related to the survey.

Column Titles of the chart above from left to right: 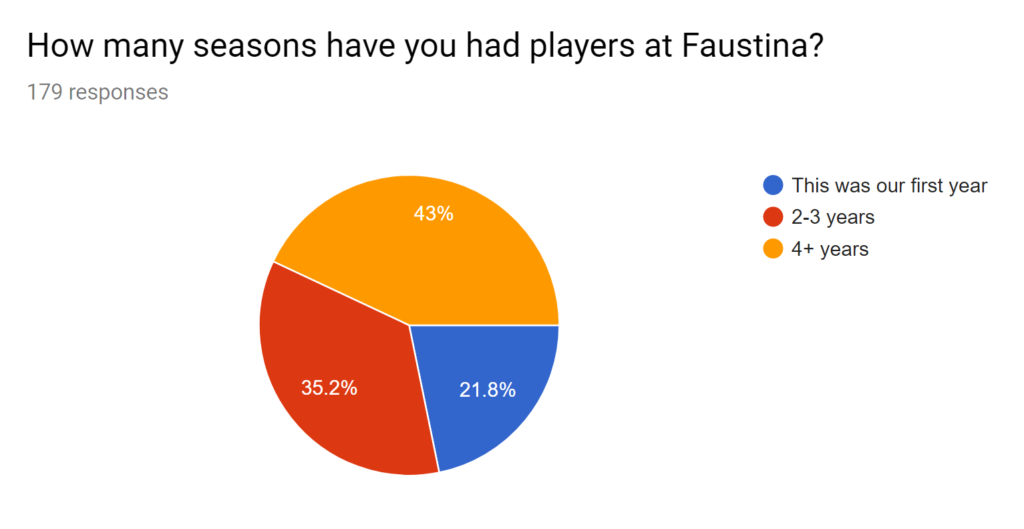 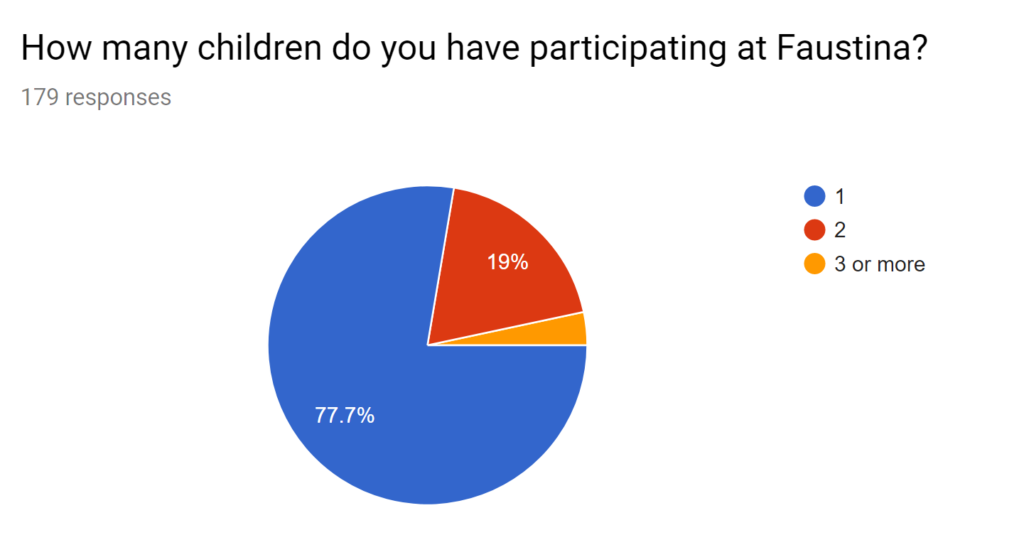 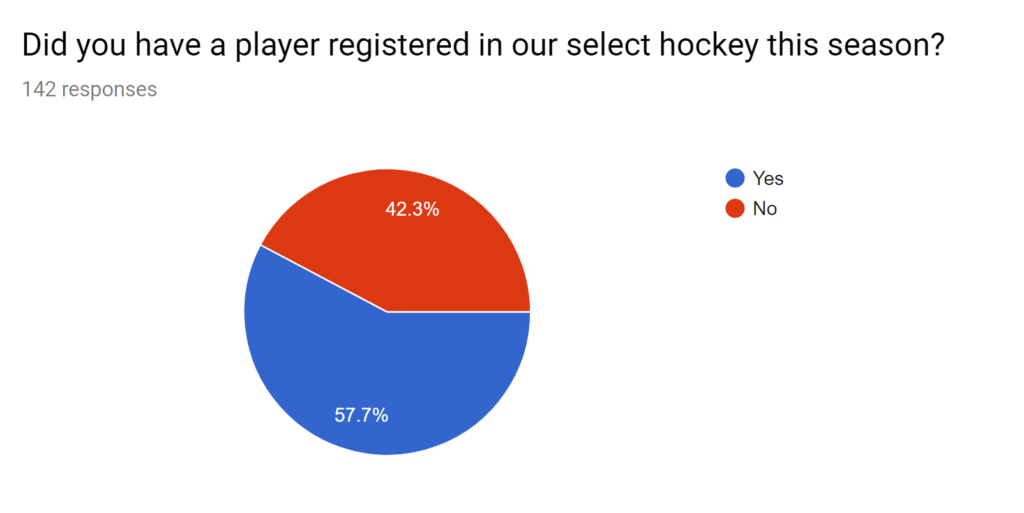 Responses to questions / issues raised on the survey

a) Practice Times (Practices are too early, Older kids shouldn’t get early rotation)

35% of respondents who provided feedback on practices were unhappy with the practice schedule. The dominant theme was that practices were too early. Some respondents noted that younger kids should get most of the early time slots.

Practices are allocated to both house league and select teams as part of our seasonal ice contact.  Ice contracts are based on recurring time slot each week through the length of the season.

At Faustina we take advantage of purchasing additional attractive hours of ice if and when something becomes available. We have taken advantage of all of the most usable ice times for youth hockey that is available to us within our current ice time requirements.

b) Need more practices (more, split into smaller groups, or by team)

This item falls under both the ice contract allocation information in #1 above and the program cost category.  Purchasing additional ice time for more practices, team specific practices or smaller group practices would result in higher registration fees.
At Faustina we work to strike a balance between delivering a strong hockey program with development opportunities and maintaining an affordable cost for as many families as possible.

c) Need more coaches on ice (work with kids, discipline etc.)
Faustina assigns a single head coach for each practice. This coach is in charge of the practice plan and format of the practice.

We look for additional on-ice help from Faustina members and volunteers.  If you are interested in helping at practices please email us at [email protected] with your name and the age group that you are interested in. Please provide some information about yourself: hockey playing back ground, volunteer history, etc.   A police check and an online course are required for all volunteers, including Faustina members.

Faustina schedule practices evenly across all divisions throughout the year.

e) Drills should be suited to player ability

Practice drills are designed to be executed by players of different levels of ability.  Coaches work with players to break hockey techniques down to individual, identifiable steps.  This process helps players to be successful at practice, relative to their current skill level.
Practices with players who share a range of skill levels helps develop peer leadership as the stronger players can demonstrate proper technique the developing players.

This is an interesting idea.  We plan to test this in the next season.

28% of house league respondents were disappointed with the outcome of team balancing this season. This is an area that Faustina always strives to improve. It is usually a complicated process.

Some of the issues that complicate team balancing are:
•    Players that may impact potential trades (very strong players or players who are developing) are away frequently before team balancing deadlines
•    Goalies in younger divisions are often rotated at the beginning of the season. Teams often finish the season with a dedicated goalie
•    Some players develop faster than others throughout the year
•    A trade can swing the balance too far the other way (good intentions can result in a weakening of the stronger team too much)

At the end of each season coaches complete an evaluation of each house league player.  When the coaches meet in the fall to pick teams players of similar development are spread equally across teams.  Our select coaches are also involved in distributing select players equally across teams.

As we go forward, Faustina will ensure that all divisions with a large gap in results (wins versus losses) will complete team balancing within two to three weeks.  We also plan on having teams in the younger divisions not rotate new skaters into goalie rotation prior to team balancing trades.

Faustina is committed to improve team balancing with each new season.
b) Avoid playing during holidays – Thanksgiving, Christmas and  March Break
We understand that everyone would rather have time off during these holiday periods than play hockey, however this is unavoidable.  The nature of ice contracts are such we pay for our weekly ice allocation every week from the beginning until the end of the season.  Additional breaks in the season would result in either shortening the season (leaving unused ice time that we need to pay for) or increased registration fees for additional ice time.

The Dolphins Pink The Rink tournament, played the week before Thanksgiving, complicates matters as the tournament takes over most of rinks in our area for that weekend.

c)  B lines having too many players
A/B lines are only utilized in the Tyke Division.  We have traditionally put the strongest players on a different line (by ability vs number of players).  This season we will be implementing a new format for Tyke Age players. Within this structure all lines will have an equal number of players.

d) Limit goals by players
This is not currently under consideration. However we do encourage coaches to work with high scoring players to pass the puck and create opportunities for other players on the team.

Our referees are required to follow the GTHL playbook related to penalty time, game and multi-game suspensions.   There are also times when the organization holds meetings with parents and players when disciplinary action may be warranted.  Coaches regularly talk to their players about rough play.

93% of survey respondents felt that officiating was well run at Faustina.  Faustina feels that we have a very good group of referees. We also provide opportunities for younger referees to learn and develop under the supervision of more senior referees.

Just like in the NHL, we know that referees don’t necessarily see everything that happens on the ice (or behind the play) but we know that they strive to do their best.

We believe that our Championship day format aligns well with our registration fees. We do not have any plans to change it at this time. This past season there was a unique situation that resulted in a lot of early morning games (and thus early morning hot dogs).  We believe that was unique to the past season.  We are open to exploring opportunities for improving what we do each season.

Traditionally we release a schedule for 3-4 games at the beginning of the season and then within a couple of weeks complete a game schedule for the year.

This year a draft master schedule for the entire season will be made available at the beginning of the season. The schedule may be revised during the season to accommodate unexpected changes to ice availability (Marlies and Leafs practices for example). This year parents will have a very good idea of when their children’s games will be scheduled for the entire season.
h) Players should shake hands after games
We understand the spirit of this suggestion however it will disrupt the schedule on Saturdays and could lead to delays.

3.  About the Faustina Organization

a) How is league run? How do people participate?

The Faustina Hockey Club is operated and organized by the members of the Faustina Sports Club.  The Sports Club was founded in 1935 and is a 100% volunteer run organization. Faustina is comprised of volunteers, club members and the club executive.

Volunteers
We have a robust volunteer base that assists with various tasks such as time keeping, assistant coaching, and helping at practices or with fundraising.  If you are interested in volunteering next season, please contact [email protected]

Club Members
Operations and decisions regarding the club are made by club members.

Members are expected to play a role in the operations of the hockey organization outside of coaching / on ice and generally have been volunteering in the club over a number of years.

This is one of the aspects that makes Faustina hockey unique – many of our most involved club members are investing their time long after their kids have grown through their hockey years and they continue to give back to the community.

Club Executive
The club has a volunteer executive board that provides planning, direction and guidance on any concerns that arise.   We hold monthly meetings for all club members which provide an opportunity to discuss club operations.   Members of the 2017-2018 club executive.

We have a great selection of Faustina Wear merchandise available.
Check it out now!